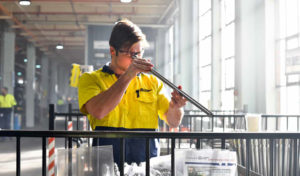 From The Firearms Blog:

Recently Lithgow Arms extended an invitation to TFB for the purposes of visiting the factory in Lithgow, Australia. Along with TFB writer Anthony J., we were able to get an extremely in-depth and up-close look at what goes on behind the scenes at Lithgow Arms. Behind the modern day company, there is a large amount of history associated with the town of Lithgow, being Australia’s premier firearms manufacturing and development center for over a century. The factory was in service as both state-owned and then today, commercial hands. In addition to touring the factory, we were taken out to the test range where we witnessed the current production F90s being fired. Due to Australian firearms law complexities, we weren’t able to actually shoot the rifles ourselves, but that was fine as we were able to focus on the demonstration and get some good footage instead. Much of this footage TFB readers will be able to see in upcoming TFB TV episodes about the history and current use of the F88, F90 services rifles, and even some more upcoming projects that Lithgow Arms is working on.